Last week a total stranger stopped me in a coffee shop to tell me my book changed her life. I was gobsmacked. It’s the kind of thing a writer dreams of and in that moment I was overwhelmed with gratitude for Elizabeth Gilbert.

I knew the work I was doing mattered to me, but there’s no way I could have endured three years of research, writing and revisions alone. Future fans of the book were too vague and blurry in the fog of the future, and I was too busy trying to keep myself from nightmare-daydream of getting lost forever in the mists of time only to find out I’d always be lost and alone, isolated with my pain and my passion, forever and forgotten. My book a meaningless waste of time, dusty copies unread and yellowing.

While I’m generally an optimist, writing a book can be an overwhelming act of faith and vulnerability. I had to forcibly stop myself from trying to decide if unsold copies of my failed book would be better burned, composted or recycled, you know, environmentally speaking. The landfill definitely wasn’t the way to go, but a secret selfish part of me wanted to send them to the landfill in hopes of discovery by future archeologists. Phone books and newspapers preserve really well in the airless belly of garbage heaps, why not my book too. It was a hopeful thought.

Luckily I could hear my inner dialogue enough to recognize this kind of peptalk wasn’t entirely positive. But it was hard enough to write my freaking book, I didn’t have any juice left over for policing my mind.

I used audiobooks instead. Tops among them was Elizabeth Gilbert’s Big Magic. I especially liked the part where she illustrates just how far she’s willing to go in defense of the act of the uncriticized freedom of creativity. She says, “I don’t care if you….. “

That became one of my core mantras. “Elizabeth Gilbert says I can draw dicks on the wall. This is better than dicks on the wall.” To add humor and poineniancy, the universe arranged a new neighborhood tagger whose hot pink spray paint scrawled all over the pavement of my favorite morning walk in the woods… nothing but penises, and poorly done.

“Dude,” I wanted to tell him. “They’re supposed to go on a wall. Don’t you know anything?” And my arrogant streak would a mental side note that my book was hands down better than these piss poor penises.

I felt guilty for even thinking critical thoughts about this guy’s pathetic creative outlet. I was writing a book on sexual shame and I hadn’t gotten fully conscious that guilt didn’t just have a choke hold on my sexuality, it was the air I breathed in every area of my life. Big Magic is a brilliant validation for the pursuit of creative and artistic expression for everyone. I needed that.

I felt guilty about sex, about taking time to myself to write about, about thinking uncharitable thoughts, about what it might be like for my daughter to have a mom who writes about sex. No matter what I did all day every day, I felt guilty about it.

I’ve come to see guilt as the signature experience of my life as a woman, and the more I speak about it, the more I know I’m not alone. The secret of not becoming roadkill run over, and over and over by guilt is self-forgiveness. Elizabeth Gilbert gave me permission not just to be

creative, but to be not enough. The reminder that I didn’t have to be any more than I am got me through the horrible scary lonely places and to the point where one day a stranger walked up to me in a coffee shop and said, “your book changed by life forever.”

She was talking about overcoming sexual guilt, but I know guilt is guilt, and the change in her life isn’t going to end there. And I am great big gooey globs of grateful to Ms. Gilbert for helping me become someone who could pass on that kind of gift.

Jupiter’s S.L.U.T. is a writer and former math teacher who taught kids with trauma for five years. She gives workshops and coaches on cultivating a deeper level of trust within.

Previous Post: « TRAUMA TO TRUTH: Working With The Language of the Subconscious

Everything we do is in service of these principles:

More from the blog… 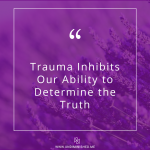 Truth is foundational to trust. You can’t trust … END_OF_DOCUMENT_TOKEN_TO_BE_REPLACED